We had a lovely walk yesterday along part of the old Barnsley canal... I took a few photos so will share them in a later post.

SO - back to HEATING... As well has having the multi fuel stove, we're also going to have a Webasto Thermotop C diesel powered, wet system: 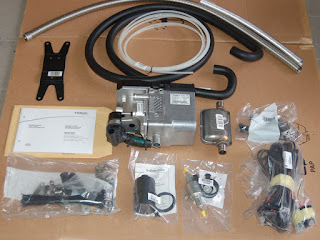 A sexy bit of kit I'm sure you'll agree? - Basically it's a small diesel burner with a built in pump. Like the stove, it's Max output is circa 5.2kw.  When installed, it heats both the water in the calorifier (without the need to run the engine) and powers the wet radiators.   The kit can be had for a little over £1k - although you can buy refurbished ones for about £4-500 - that claim to have all new parts.

We're tempted to "risk" a refurbished unit, given it won't be in use all the time... we'll have to think on that a while longer though as it would be a faff to replace once it's all plumbed in if it proved to be a false economy.

It "claims" to use between  0.3 and 0.61 litres of diesel per hour - which even at 99p a litre, isn't really that expensive... There's a link here to the official data sheet: http://www.webasto.com/fileadmin/webasto_files/documents/country-folder/usa/hd/Data-Sheet/usa-heavy-duty-datasheet-thermo-top-c.pdf

Fin rads are basically tubes with metal fins on.  Hot water passes through the pipe, and heats the air in the fins causing it to rise and draw colder air in at the bottom to be circulated and warm the room. 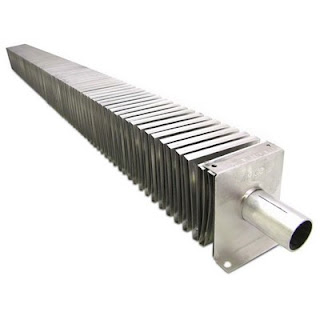 The 2 in the dinette/rear cabin are to be 5 ft long and  each rated at 640 watts  - there will also be 1 small (400mm x 500mm) convector type radiator on each side to supplement these - rated at  356watts.  That's a theoretical maximum heating capacity in that room of 1992watts.

Given it's only 6 ft square, we hope that will feel warm enough.

Despite the output of the burner being rated at 5.2kw, in our current plan, the combined total rating for the radiators and finned rads is quite a bit higher... I don't have the exact figures to hand (they're  doodled on the wall) but it shouldn't be a problem.  Diesel burners respond better to having to work hard, rather then cycle on and off ... cycling on and off quickly can lead to them getting coked/sooted up - thus requiring more frequent maintenance.

If we do discover certain radiators are not getting hot enough, we can simply turn one of the lounge ones off to "release" a bit more capacity.  We can do this by having a twin piped system throughout, with each radiator/fin rad, having a manual control valve at either end... it's going to be a bit of trial and error but I'd rather fit too many to start with than not enough.

In practice, I suspect once the stove is burning away, we'll probably only really need the ones in the rear cabin anyway...  from our previous experience with coal fired stoves, you can get the temperature quite high... to the point where it might be minus 5 degrees outside, but you are sitting in the boat  in your underpants with the doors and windows wide open!

TRY not to think about that one too much - for obvious reasons lol.

If money were no object, we'd be investigating an underfloor heating system.  It would be much neater than having wall mounted radiators and we'd feel much more comfortable with a hot floor - the reality is that for it to be efficient, you'd have to insulate the floor of the boat properly -  which given the ballast would be a ball-ache... and without doing so, a lot of the heat created would be wasted heating the water in the canal.    Underfloor heating on boats is the privilege of the wealthy I'm afraid... perhaps on the next boat.