For whatever reason, last night when I went to bed (bearing in mind I'm still poorly) my brain was racing - thinking about the boat of course.  I don't know why but it came into my head that if the gas-locker was to be at the rear, it might be too high to have a seat on the top of it.
SO - at about 2 am (having given up trying to switch my brain off) I decided to get up and measure the height of a 13kg propane cylinder... well when I say measure, I mean google it.  It turns out they are 580mm high.  By the time you allow for fittings/gas fuse a bit of a gap, metal and a buffalo board seat on top, that brings the overall height up to about 650mm if you're lucky.  650mm whilst ok for a seat, would mean very little in the way of back support - or rather, back support to stop you (or your guests) from toppling into the canal.  WHICH I suppose you don't really want - then again , that rather depends on who they are ;-)... anyway, that being the case, it was time for a bit of a re-think.

On many boats, there is a gas locker at the very front and I think we'll have to do the same.  Which of course leads us to a problem with the original design.  Namely, HOW to get the gas pipe down the boat on the side the cooker and oven are on.  Under the gunwhale is the normal route but on the starboard side, that would mean some fancy routing (possibly  dangerously) around the eventual vent, pumpout and rinse pipes for the planned macerater toilet.  This has meant we need to change either the side of the boat the bed head is on - and the loo or leave the bed and loo as was and move the oven and hob to the other side.

This is what I've done - I've also therefore had to move the sink and washer over to the other side to... which on reflection is probably a good idea to balance the weight out a bit... originally, the washer had been on the same side as the multi-fuel stove ...ergo, a lot of weight to port.  Now at least these 2 will help balance each other out on opposite sides of the boat.  The dishwasher will also move accross and help further offset the stove's weight.

On this latest photo: 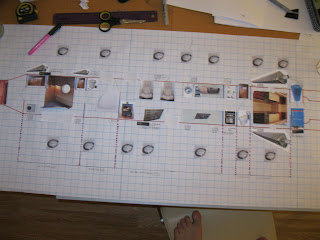 of the freshly re-drawn boat, I've also inserted 12v dc and 230v ac power outlets where I think they'll need to be.

I need to check the ratings of the 12v appliances and do some calculations in regards voltage drop to determine the required thickness of the cable.  To help me with this, I've been consulting this book: 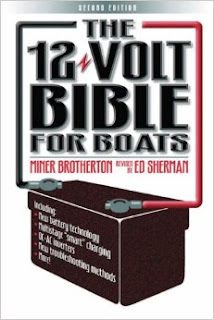 It's good (apparently) but boy it's heavy reading... I'm considering "war and Peace" instead for something a little lighter.

You may also notice (aside from my left foot), I've put chrome portholes where I think they need to go.  We're thinking about half opening ones from a security point of view at the moment...  that could change of course.  We'll need to  consult other owners and look at a few more boats to see if 7 down each side will be enough.

Meanwhile, I had better get my nose back in this book... zzz zzzz zzzz