This morning I phoned Chris at the original boat yard to try and arrange an appointment for this coming Saturday.  They only open (to the public/customers) for 2 days a week and as I can't take time off work, any meetings will have to be done on a Saturday... ANYWAY,  it turns out the poor chap has a 'nearly broken' leg... I'm not entirely sure what that can mean but he's hobbling about on crutches he said.

The outcome of the conversation was that he has a new boat handover to do on Saturday and until he has a confirmed time for that, we cant agree a definite time for our meeting.  He said that if I call back on Friday afternoon, he should know what the plan is and he'll confirm when he can fit us in.
That's all fair enough ... it'll either be about 10.30am or 3.30...  either is fine with us as it's the only thing we have planned for this weekend.  Well I say that, ideally I need to get sorted in the greenhouse and get the seed propagators ready for my 1st February kick off but the boat order has to take priority.

During our conversation, Chris explained that he needs to allow plenty of time for the boat handover/commissioning and that is why he can't really guess when he'll be finished.  This is a good thing - it's very reassuring that he's fully committed to the folk who's boat is complete and not prepared to rush them, just so as to be able to chase a new order.  By the sounds of things, they don't NEED to chase orders anyway as from placing the order to delivery is now somewhere between 8-12 months...  wars have been won (and lost)  in shorter times.   Waiting and being patient is not something I'm particularly good at.  Ideally, in "my world" - we'd turn up on Saturday... do some sketches and then come back a week later to pick up the boat.... if only lol.  Instead, we'll be paying a deposit and hopefully running through some preliminary plans.

Whilst I'm not very good at waiting, the longer it takes, the better position we'll be in financially - the greater the number of pay-days, the more savings we'll have squirreld away.  Hopefully, we  will have paid off the rest of the money we spent doing the bungalow by then too - luckily, it's all on interest free credit cards which have come in very useful... it's meant not having to use boat fund savings.   If someone had said to me even 10 years ago that by the time I was 43, I'd be 'almost' financially secure, I 'd have said they were bonkers.  The reality is, whilst we're not rolling in money, we've learned to be very sensible about what we spend and now make sensible choices rather than spur of the moment decisions.   My dad thinks I'm a penny pincher (he's not - quite the opposite) but even little things like timing the dishwasher and washing machine  to start at separate times, during the sunniest hours of the day (when the solar panels at generating their highest output) reduces the power taken from the grid.  -  As Tesco keeps telling us, "every little helps".

In addition to the main boat savings fund, we have this: 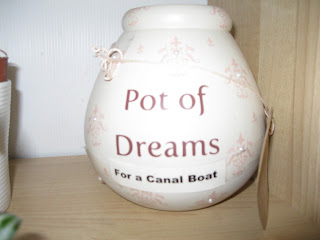 I think the label is obvious enough.  My oldest dearest friend gave me this as a birthday present a few years ago.  She even put some notes in it to kick us off.  Since then, every 2 pound coin that's passed through our hands had gone in AND numerous notes when we've had a bit spare.  The current state of play is that we've not got the first clue how much is in it.  This is a good thing.  We've already agreed that it's going to be spending money for the first year we live on the boat.  It's not the only pot around... we gave my parents one with a similar label (saying "for Mark & Andy's narrow-boat")... I don't know if they're putting anything in but we live in hope :-)