Today we went over to Lymm to meet with Chris "properly".    We were early of course (we always are - that's my ocd for you)... and it was good to be able to have another look around some of the boats in build.  There were quite a few in various stages with chaps beavering away on a Saturday.

It's also good that they've plenty of work on - Although that will mean about 10 months before we can get our boat... hey ho.

Sitting down with Chris, I proudly unrolled our plan - half expecting him to pull it to bits.  On the contrary, he got out his graph paper and proceeded to transpose our sticking & gluing on to working palns for them.  We've had to remove a few portholes - apparently 7 down each side is a bit overkill - 9 overall is the norm and at £400 each for additional ones, an extra 5 would prove rather expensive.... we've compromised and just had 1 more...  a nice even (or rather odd) 5 own each side.  The extra hatch also adds another £400 ... In short, it will cost a little more than planned but that's the way my life tends to roll anyway.  No matter... we're only going to do this the once, so it may as well be the way we want it.

Not sure if this will work but here's a link to a scaleable version of the plan  so you can actually read what's where... Don't worry - you're not seeing double ... we did  1 for Chris, and 1 for us...DOUBLE PHOTO  .., assuming it doesn't work, heres a compressed one anyway : 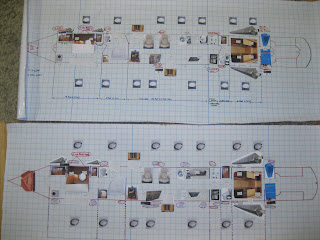 We talked through each section of the boat and Chris updated his plan accordingly.   His notes look a little less flamboyant than ours don't you think? 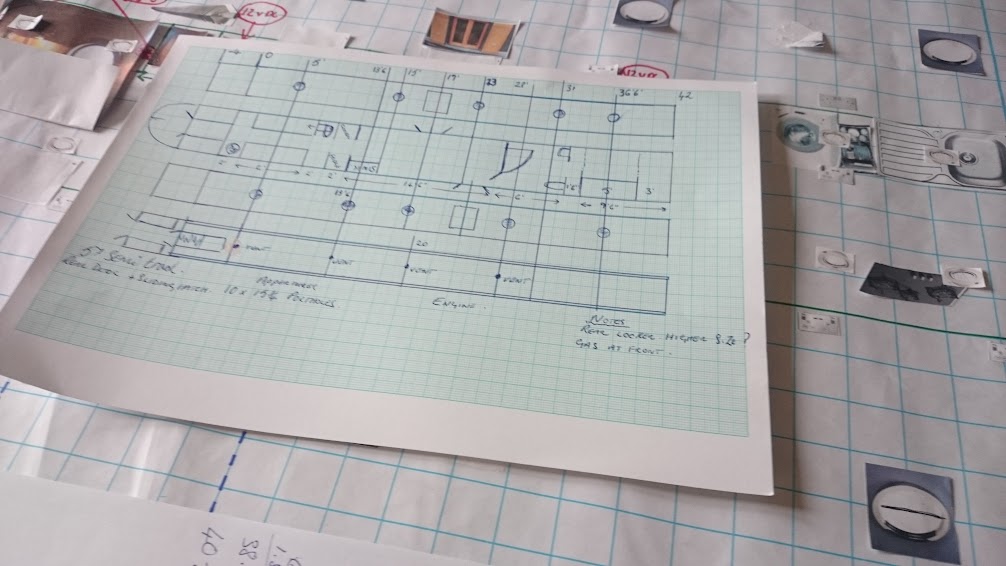 Nothing major was pointed out and he agreed to fit the additional bulkheads at a discounted cost of £100 each rather than the standard £200.   It's things like that which make such a difference.  A side from the obvious savings, it engenders a spirit of goodwill.  He's also happy to alter the standard calorifier from 55 to 75 litres and increase the battery bank from 400ah to 540ah.

By the time we'd driven back home and called in to Sainsburys (other supermarkets are available) to get some rations, Chris had emailed boat sales agreement through.

SO that's the ball rolling - I've transferred the Deposit this afternoon and now we need to wait patiently...  ... ...  hmmm...