Ok I know.... most people don't lose sleep over gearboxes... unfortunately, I'm not most people.  It's been a very long night - tossing and turning thinking about "stuff" - NOT helped by the fact last evening between having tea and going to bed, I manged to put my neck out.  NO idea how.  Which of course has meant every time I moved in the night, it woke me... (during those rare moments when I fell asleep that is).

So - gearboxes... After Saturday's initial excitement about having placed the order, I was reading through the mechanical spec on the sales contract and noticed the set up.  Basically, it's a Canaline 38hp engine with a prm120 gearbox. 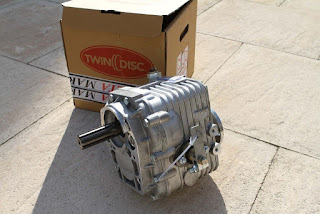 The trouble with being me - and having had 6 years to look into things, is that wherever I've read about gearbox problems, the prm 120s have come up time and time again.  There's nothing wrong with them per se, it's just they are mechanical... ie 2 metal plates, SLAMMING against each other.   The PRM150 however is much more civilised beast ...of a hydraulic nature - which if maintained properly (and she will be) should outlast the 120, 5 times over.  I know this fact from one of my research calls to an installer, prompted by various articles I've read about them.

Another thing that was on my mind during the dark hours, was getting the boat back here.  Initially, when I'd done my route plans, I'd scared us both, thinking we're have to come over the top via standedge tunnel - ie 3 miles in the dark in a boat we're unsure of, with neither interior or proper fixed tunnel lamp.  I hate tunnels, in fact, it's the one thing about boating that will make me miserable at times.... More so than rain.    When I'd looked on route planner, I'd gotten it into my head it was going to take us about 2 weeks to get the boat  here - assuming 5 hour days given it will be November/December and dark early...  Since having a discussion with another boater about it, it was pointed out we could come OVER rather than through by using the Rochdale.  That would take about a week and only encounter "short" tunnels.

We're going to think about that one - it's dooable but will still not be pleasant on a half fitted out boat with no heating.  The yard will fit a fire but charge £2400 for the pleasure...  given the stove in mind, is under £500, we can't stomach that and STILL have to spend the holiday time on an endurance run. So the current plan is still to have it lifted out and taken by road transport.  Ironically, this will probably cost not far off the fire figure but at least it will mean our time off work can be spent doing stuff instead....  free time at this point in our lives is shorter than money if you follow... not that we're rolling in it - far from but I'm sure you know what I mean.

That'll have to do for now  - I'm off to the hospital this morning to see the plastic surgeons.  Just a follow up for an op I had a few months ago... I'll need to shave a bit of my chest so they can have a proper look at the scarring.   Without going into gory details, I had a small bcc (basil cell cercinoma)  which was removed by taking a 3 inch circle out of my chest... it was done by the consultant's assistants as he had to go home ill on the day.  It's a bit wonky, and the dis-solvable stitches didn't dissolve.  It does't matter...  I am too over the hill to worry about ugly bits - I've enough everywhere else anyway ;0-)