Apparently, this has been the warmest and wettest winter on record...  well this morning, Jack Frost paid us a visit in the form of this: 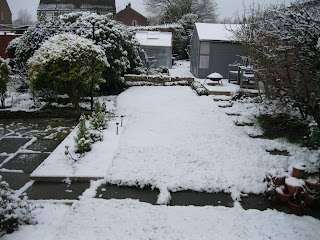 We knew it was coming of course thanks to the mass hysteria on the TV and radio...  warnings of 1-2 cm... yes, you read that right - warnings of less than an inch of snow.

What is the world coming to.  When we were kids, there'd be snow drifts higher than cars yet the school bus always made it through and rarely did we miss a day due to the weather.

If you are living on a narrow boat however, a sudden cold snap can catch you unaware s, causing misery if you're water tank is low or poo tank is full.  Reading the forums earlier on, there were a few postings from sensible folk, topping up their fresh water tanks and repositioning themselves nearer to amenities.  Getting iced in is no fun ... it's OK for 24, maybe 48 hours but any longer and it can be really miserable.  A couple of Easters ago, we'd hired an old tub from Braunston and we got stuck.

We only had the boat for 5 days - 2 of which were somewhat wedged in going nowhere. Luckily, we'd taken notice of the forecast and not gone too far.  At that time, we'd not quite got to grips with the stove and were either boiling hot, sitting there in our pants with the doors and windows open , or shivering wearing all the clothes we had with us, whilst trying to get the ruddy thing burning.

I've been looking for a photo of it and the best I could find was this: 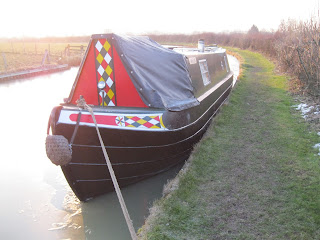 Not the best photo really, as by this time the ice was thin enough to push through - the noise it makes though is awful.. OK for a hire boat I suppose but not something you'd really want to do in your own.

Writing of our "own"...  the decision is made... We intend to place the order this coming weekend.  I've a couple of reservations in that I don't know how amenable the builder will be to our design.  I suspect we may have to offer to pay increased deposits to compensate for any perceived difficulty he'd have in trying to sell it on, should we shirk on the order.  Which we won't of course but I can understand his point of view.

The snow of course has now gone.