In recent months, we've been actively looking around for somewhere local (ish) to moor the boat whilst we complete the fit out.  It's harder than you might think.  Here 'up north' there just aren't very many places near enough.  It wouldn't matter so much if we were buying a fully completed boat as travelling 50 miles or so "to play" would be fine... but travelling 50 miles after work with a car load of materials would very quickly become a pain in the proverbial harris.  We've visited a few places where a vacancy does exist and have found one only about 10 mins drive away that has a good feel to it.  It's a branch of the Calder and Hebble Navigation near Castleford. 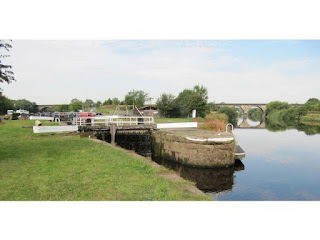 There are no facilities as such (well there's water and a paid for Elsan point) but it does have a good feel to it and despite the slight risk of it flooding - like it did on boxing day when the Calder exceeded it's record, it's usually ok.  On boxing day however, the river was 2 foot over the TOP of the lock gates and flooding back up into the cut... the flooding was exacerbated by additional water, coming in from the top of the moorings, where the river was flowing across the main navigation.  This  is a bit of a concern but there is always someone on site and if it does happened again, we can get there in about 10 mins to help loosen ropes as the waters rise, but more importantly perhaps, PUSH boats back into the main channel when they begin to recede.  That's very important as once the level of the water has exceed the top of the channel by more than 2 foot, most narrow boats can then become stranded up on the bank when the level lowers again - like happened over at Broad Cut. 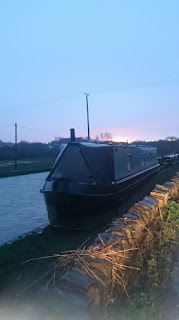 This poor fellow got stranded as there weren't enough folk around to be able to push him back into the channel when levels began to drop.  Whilst it will be a problem (access wise) getting back in the water, he's very lucky... many others near by weren't 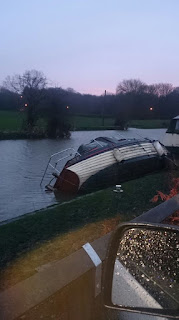 This is about 100 yards further along from the chap stranded on the tow-path...

Sorry, back to the plot... I had a chat with the manager/owner before Christmas when he confirmed they do have 2 vacancies at the moment - 1 individual linear mooring on the tow-path at circa £140 pcm ... OR a double breasted one - currently up against a boat for sale at circa £116 pcm.   When we spoke (seemed a decent sort of bloke too) he did say that whilst he'd happily take a monthly rental fee from us to keep the mooring, we could take a chance and try contacting him again when we have a more definitive completion date for the boat.  This of course DOES make sense... especially financially as let's face it - we could end up paying over £1.5k for nothing... that money could be used to buy and install the multi-fuel stove!

That WAS the plan...  or at least was the plan until we placed the order.  Since then I've had  niggle that what if the spaces have been taken and we can't store the boat  anywhere local enough to make the process enjoyable? - With that in mind, I've emailed the chap and asked him to think about letting us have either first refusal if someone else comes along OR (and I suspect this is the fairest option) letting us pay a nominal retaining fee for keeping it vacant longer term (still on the basis that if someone else wants he, he'll get in touch and we'll have to cough up full price from that point) or if he can sublet it short term for extra money he can - so long as it's free from November.  That was 3 days ago and ever patient... I'm not stressing that I've not heard back from him yet... much :-) .