Still suffering with the man flu, I spent most of yesterday lounging around watching day time television.  Oh my word - I don't know how people do it... it's basically rubbish and by tea-time I was ready to "organise and pay for my own funeral"... "take out a plan to leave some money for my loved ones left behind"..."claim for compensation for accidents at work" - you get the picture.... oh and of course I can't wait for my "free Parker pen" just for inquiring.

When I get to the point in life that  I don't have to go out to work as such, I WILL be reading with the radio on in the background rather than being glued to the telly box!

Right - back to the plot.  I spoke with Gordon yesterday... we discussed what I'm trying to achieve and the amount of money we can scrape together.  To cut a long story short - Gordon isn't able to help us.. at least not for amount we have. To give him credit though, he suggested several different ways to go about achieving the same end result.  Unfortunately, due to the long hours I work, buying a boat at any earlier stage than lined is just not feasible.

Oh I know it's not beyond my ability to cut out portholes and line the thing etc. it's just with our health the way it is (various incurable but controllable) conditions between us, it would take too long and become all consuming... in the same way doing the bungalow up did.  OK, so the end result is ok, but it's taken over a year to physically recover from it and neither of us feel we have the strength to undertake such a commitment so soon.

The outcome of our conversation was that we can moor the boat down with him in Sheffield under a bridge and his chaps would help out where they can.

I put the phone down feeling totally deflated... I think I already knew he would be unable to do it - folk have to make a living and that's fair enough... I suppose there is some solace from his kind offer of help though.  Even in tight financial times, folk ARE good and genuinely do want to help others.  Humanity/human kindness is still live and kicking... just not kicking quite hard enough for us lol.

So the plan now is to regroup, look at mooring options locally, get proper estimates for delivery by road and find somewhere to crane it on to local waters,  We'll place the order where we originally intended to and get things under way.

On the plus side, doing this research HAS put us in touch with people locally who may be able to help in the future.   It's also reassured us that our original plans were actually quite good.  I know we could bring the boat back here via the canal network ourselves, but given it won't have horn, tunnel light, interior lighting, toilet, running water etc. that would be an unpleasant 2 week endurance so it's better to save for a couple of extra months and cut that one out... that way, when we do get it home, we'll have an instant honeymoon period to work on it.

As a reminder, this is what we'll be ordering shortly - but with portholes only.  It's not my photo but I'm sure whoever it belongs to won't object... if they do, please let me know and I'll delete it and replace it with one I took (mine was a bit blurry) 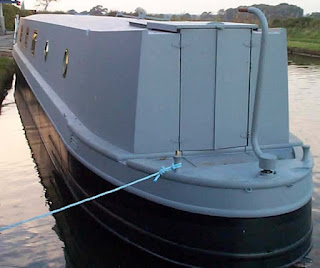 For the rest of today - well as I got up for work as normal but by the time I'd gotten dressed felt like death again, I'll spend it on the sofa reading with the radio on in the background... the telly can stay off!