Yes I know... it's a bit premature ordering life-jackets but whilst reading through the canalworld forums, a respected member recommended these Challenger II 275N Life Jacket So I ordered a couple from Ebay *other auction sites are available*...(apparently) but lets face it, Ebay is the only one I we all use.

Eric next door came out to see me when I was taking the bins out after work - in my pants I admit as the bath was already running.  It's good living next door to oldies - you NEVER have to go and collect a parcel from the post office OR delivery depot and it gives him a chance to have a natter.  He's impressed with my organisation - although he doens't approve of me being in the street in my underwear... that didn't stop him chatting for 10 mins though whilst I shriveld up  shivered.

A lot of folk don't bother with life-jackets on the canals.  Historically we've never either.  We did however last year when taking Andy's 11 year old nephews on holiday with us wear them... briefly during the Foulridge Tunnel on the Leeds/Liverpool Canal.  Unfortunately, the ones supplied by the hire company were the old bulky foam type that a) stood out a mile and b) made you feel both uncomfortable and stupid.  However, being responsible uncles, we wore them all the same.

I doubt we'll wear them very often, but I WILL certainly wear them in wet conditions or when I'm half single handing - what I mean by half single handing is when Andy has gone off to set the next lock in a flight and I'm coming out of a lock on my own ... stopping on the landing to close the gates.  It only takes one slip and you can be in a lock, knocked unconscious and dead.  That's the good thing about self inflating ones with a high rating - upon inflation, they'll turn over a dead weight in the water, so if you are out cold, at least you won't drown face down... I've gone for the best we can afford on the basis that if you're gong to do something - you may as well do it properly.  There are lots of cheap ones on Ebay which might seem a good idea but when your life (or the life of someone you are responsible for) depends on it, it's just not worth taking a gamble with Chinese rubbish (no offence China)... no, Good old British made and used in oil rig installations... they're the ticket. 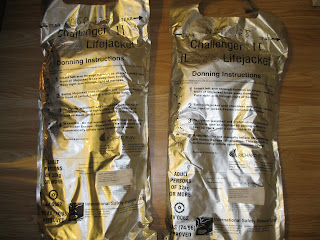 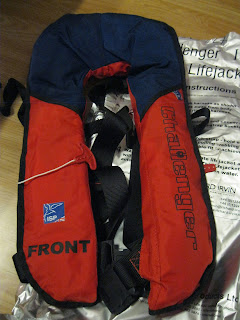 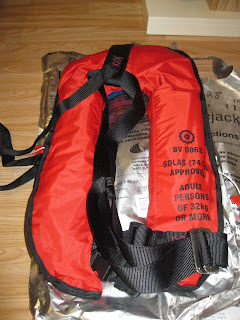 These don't need testing again until 2019 - at which time I might push Andy into the canal - just to check of course ;-)

We'll still need to buy another 2 but for now it's a start and it does feel good to be getting things we need.
Hopefully, my next post will mean the boat has been ordered...  meanwhile, its back to that ruddy 12v bible - hmmf!