Wasn't it horrible this morning, waking up to the news that Terry Wogan 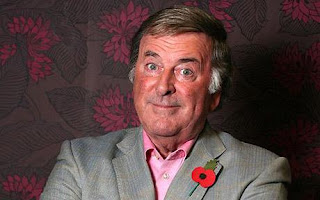 had died in the night? - I can't believe how sad so many people are feeling... including me.  I've had tears in my eyes on and off most of the day... So much so, that I've had to switch Radio 2 off today - something I rarely do.

All credit to the presenters this morning, paying tribute to him.  To many - as I suppose to me, he was "Uncle Terry"... and it really feels like a close family member has been taken.

Thinking back to childhood, I HATED being forced to listen to him by my parents on a morning...  In early adulthood however, he drove to work with me every day for many, many years...  His radio firework displays had me in stitches, year after year - NOT to mention the Janet and John stories that he so regularly struggled to get through as a result of laughing so much.

And as for the floral dance record he made back in the late 70s ... he was having as much of a laugh at himself as we did:

I shall miss him.   I shall miss the "dream" of being able to lay in bed on a Sunday morning in the boat, listening to him do his show... I'd only just gotten used to not having him on a weekday morning - Chris Evans was and remains a poor replacement...

So - that's January over with... a sad note to end on but there we have it. Brighter skies ahead? - I hope so.